Now, you may ask me what has that to do with opening a fashion label, but I think that knowing the processes involved makes one knowledgeable and also makes one in a better bargaining position when approaching people in the industry. You should not be in a position, where you do not know such basics as that gives the other person a sign to fleece, however, a knowledgeable person stands to make good use of his/her knowledge and gain respect of their contemporaries.

Ginning as a process is hundreds of years old, with the most earlier machines dating to the Indian and Chinese civilisations. However these were also very small scale and involved manual processes. It took American innovation to turn the tide and bring a revolution in garment manufacturing. People also assume that it led to the first American civil war, as the boom created a demand for slavery that was fulfilled by the slave traders in no time.

Eli Whitney in the late 1790’s created his patented ginning machine. Whitney’s cotton gin model was capable of cleaning 350 pounds of raw cotton per week. The model consisted of a wooden cylinder surrounded by rows of slender spikes, which pulled the lint through the bars of a comb-like grid. The grids were closely spaced, preventing the seeds from passing through. There was no jamming as cotton was removed from the loose ends, separating the waste.

Also read: What are Pantone colors?

According to historical sources, Whitney (who died in 1825) could not have foreseen the ways in which his invention would change society for the worse. The most significant of these was the growth of slavery. While it was true that the cotton gin reduced the labor of removing seeds, it did not reduce the need for slaves to grow and pick the cotton. In fact, the opposite occurred. Cotton growing became so profitable for the planters that it greatly increased their demand for both land and slave labor.

Moving on, the trade gave way to the industrial revolution and today ginning follows a similar process although it is done in huge mechanical machines at an industrial scale. After ginning, the cotton goes to the spinning mills that manufacture the thread. After thread is manufactured, the threads go to knitting mills for making the fabric. After fabric is made, garment and t shirt manufacturers like us buy the fabric and start making ready pieces as per our design or as submitted by customers for their custom t shirts.

Let us know if you liked to read this in the comment section or feel free to mail us. 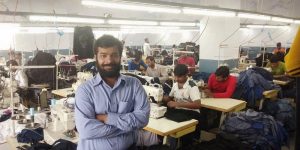